Actually crystalline mordenite is overlapped by a number of such layers together by appropriate means, linked together. Thus, the crystal form mordenite in a lot of straight-shaped pores, wherein the diameter of the largest is composed of twelve-membered rings composed of straight-shaped pores, which is the main channel of mordenite, elliptical cross-section, a major axis diameter is 0.695nm, minor axis diameter of 0.581nm, they seemed like bundles of tubes, which is a, X and Y-type zeolite clathrate pores are very different. In fact, the straight-shaped pores with a certain degree of torsion, the layers are not overlapped opposite phase, but there is a certain mutual displacement.

Thus, it may be reduced to an average diameter from 0.4nm 0.66nm. Between the main channel of mordenite small pores also communicate with each other, but because of these small pores aperture (about 0.39nm) small molecules generally easy to go in, only the main channel access. Mordenite crystal molecules in and out of it, can be considered as a two dimensional, and A, X, and Y-type was three-dimensional. 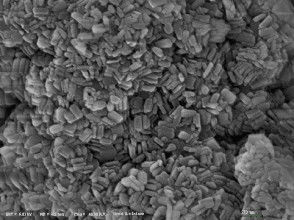